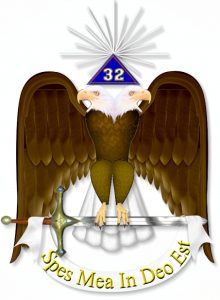 There are thirty-three degrees in the Scottish Rite. Numerous controlling bodies confer them. The Craft Lodge (Blue Lodge) is the first of these and includes the Entered Apprentice, Fellowcraft, and Master Mason degrees. These are the first three degrees needed to be completed to join the Scottish Rite. Once a member has become a Master Mason, he then can go on to further his education through the additional degrees. These degrees are obtained when a candidate learns a lesson by observation of a play. These plays include current events of historical importance or many times Biblical ones.

The third Masonic degree, known as the Master Mason, is the highest reachable rank in all of Masonry. The Scottish Rite degrees are the fourth through thirty-third degrees that can be attained after becoming a Master Mason.  These degrees are not considered ranks, but rather further education in the principles of Freemasonry. There are a few lodges that do use the first three Scottish Rite degrees, but this is seldom the case.

This is the fourth through fourteenth degrees that are called the “Ineffable Degrees” of the Rite. They investigate and study the unspeakable name of Deity. They include the following:

This is the fifteenth through the eighteen degrees. They give the candidates a better knowledge of ethics, religion, philosophy, and history. They include the following:

This is the nineteen through thirtieth degrees. These degrees teach philosophy, chivalry, and are full of mystery and symbols. They include the following:

This is the thirty-first through thirty-second degrees. They vary in content and form. They include the following:

There are various honors that members can receive when they have given exceptional service. Both the Northern and Southern Jurisdiction call this Inspector General. These are honorary achievements.