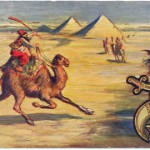 Most Americans are familiar with the Shriners, whether it is through their circuses, their fez hats, their miniature autos rolling by in parades or their charitable work operating children’s hospitals all over the country. What many may not know is that the Shriners are a Masonic organization—the Ancient Arabic Order of the Nobles of the Mystic Shrine were established in New York City in 1870. Their hospitals operate in 22 cities around the United States, offering free medical care for children afflicted with various congenital disorders. In front of many of these hospitals one can see a statue with a Shriner holding a small girl in one hand and a pair of crutches in the other. The story of this image tells a lot about what Shriners and Masons are all about.

The Shriners were established to give Masons an outlet for fun and fellowship; any Master Mason (the third degree and basic accomplishment before going on to Scottish or York Rite degrees) can join. This explains the funny cars, the distinctive hats and the terrific entertainment offered to the public at Shrine Auditoriums around the country. With all of the connections developed among Shriners, it became clear that they ought to undertake a charitable cause. Shriner Hospitals were first built to treat childhood polio, at one point the most feared juvenile disease in the US. After the development of a polio vaccine, however, the Shriners broadened their work and now their hospitals treat children with cleft lips and palates, spinal cord injuries, burns and orthopedic conditions.

One young patient at a Shriner hospital in Evansville, Indiana back in 1970 was Bobbi Jo Wright. Bobbi Jo was born with cerebral palsy, and she received a number of surgeries at the St. Louis Shriner Children’s Hospital. Back in Evansville in the summer of 1970, she was attending a Shriner sponsored party at an amusement park and having difficulty getting around on her crutches. That’s when local Shriner Al Hortman scooped the little girl up in one hand and carried her crutches in another, helping her to enjoy the day. A local newspaper photographer snapped a picture of the two, and it was headlined “An Editorial Without Words.” Shriners who saw the picture quickly adopted it as a symbol of what the group stands for—the fun of a day at an amusement park along with the service to needy young people Hortman represented by picking up Bobbi Jo.

Interestingly enough, while the statues (now numbering more than 125 outside of Shrine Auditoriums, hospitals and the international headquarters in Tampa, Florida) show Hortman and Bobbi Jo from the front, the picture in the newspaper displays them from behind. Also in the picture was Al Hortman’s daughter Laura, herself a one-time Shriner Hospital patient. Indeed, it was Laura’s treatment and the kind and friendly work of Shriners that led Al to join the order in the first place. Al Hortman passed away in 2007, proud to his last day to have become the symbol of Shriners’ charitable work. Bobbi Jo still lives in Evansville, Indiana, and has been a guest of honor at many of the statue dedications.

The Shriners were founded to help Masons have fun, and ask any Shriner and you will hear about the good times they have. But the sense of charity, honor and love that the Lodge instills in men led the Shriners to do vital work for children around the country. Al Hortman expressed this spirit in “an editorial without words,” and for this simple act of kindness, he has been honored by his brothers to this day.