Home Masonry What Are Some of the Symbols of Freemasonry?
Spread the love 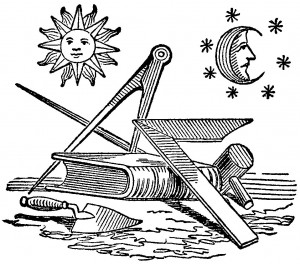 Freemasons created a rich spiritual code of conduct based around the symbolism of medieval stonemasons as allegorical philosophers. Much of this symbolism is depicted in the writings, art and architecture of the Masons. Freemason symbolism is so complex and detailed that no single article could cover every element. Here are a few of the most famous:

Three Steps: This symbol addresses the three stages of life and Masonry, commonly depicted as three men standing on three steps. The first step signifies youth, and corresponds to the Entered Apprentice stage. In this step the apprentice works on acquiring the basic knowledge of the Lodge. The second step signifies manhood. Masons in this phase are known as Fellowcrafts, who apply the teachings of Freemasonry to daily life. The final step is that of Age, wherein the Master Masons enjoy the rewards of living and practicing the spiritual tenets of the Lodge. Masonic buildings commonly repeat the elements of the Three Steps.

Pot of Incense: This symbol refers to the gratitude and pure heart that the Mason is always working to exemplify. These values demonstrate a Mason’s conscious contact with God. To the layperson, the pot visually resembles Aladdin’s Lamp.

Bee Hive: Industriousness is a central value of Freemasonry. The Bee Hive represents the humility and importance of a strong team-based work ethic. The Bee Hive also symbolizes the practice of secrecy, as only the busy bees know what takes place inside the hive.

Book of Constitutions Guarded by the Tyler’s Sword: This symbol reminds the Mason to be guarded in thought, word and action, particularly when in the face of the uninitiated. Central values relating to this symbol are silence and circumspection, i.e., “Think before speaking.”
“Tyler” refers to the office of the outer guard. The Tyler greets people at the door, qualifies membership, and generally acts as a sergeant-at-arms. The sword is a common element of Masonic symbolism, as an inverted sword forms the shape of a cross and wards off evil.

Sword Pointing to a Naked Heart: This symbol reminds the Lodge that justice ultimately triumphs over all. This symbol is also seen in popular culture.

All Seeing Eye: The All Seeing Eye symbolizes God, who is obeyed by the heavens, manifested in the heart, and will reward the righteous. This symbol is famously represented on the U.S. One Dollar Bill, and is depicted by an eye in a pyramid. The pyramid is incorporated in the symbol because God is the “Great Architect.”

Anchor and Ark: These emblems symbolize a well-spent life and a well-grounded hope. In other words, the ark carries one to safety in stormy seas, and the anchor moors the believer in safety.

The Forty-Seventh Problem of Euclid: Depicted as a triangle bordered by three grid-blocks, this symbol celebrates Ancient Greek mathematician Euclid’s discovery of the Pythagorean Theorum. This theory describes the geometry of a right triangle, and is a watershed moment in the Liberal Arts.

Hourglass and Scythe: Just as in common culture, the Masons use the hourglass to communicate the idea that times flies, and life is precious. In the same vein, the scythe symbolically cuts the brittle thread of life.