Home Masonry What is Freemasonry
Spread the love 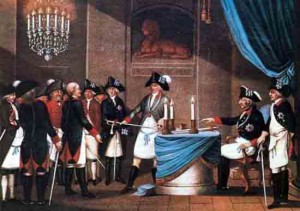 Ask people what they know about freemasonry and the answers you get will probably be based on what they have picked up from unreliable sources, and as such may not paint too true a picture of what freemasonry’s really about. For years, freemasonry has had to fight against a public image that has been created, in part, by those people who not only know very little about the organization but for reasons of their own seem eager to disparage it.

Freemasonry is not a religion, nor is it a substitute for one. It is not a political organization either; in fact, discussion of politics is forbidden at Masonic lodge meetings. Membership is open to men of all races, religions, and political persuasions who are of good repute. They must, however, believe in a Supreme Being, this being one of the linchpins of freemasonry and the essential qualification for men wishing to join the fraternity. Freemasonry is, in essence, a society concerned with moral and spiritual values, which offers its members an approach to life that endeavors to reinforce thoughtfulness for others, kindness in the community, honesty in matters of business, courtesy in society, and fairness in all things. To this end, freemasonry can be regarded as a charity in some respects. From their earliest days, freemasons have helped the sick and aged, and members are encouraged to place paramount importance on the interests of the family, as well as caring for the less fortunate.

On a practical level, freemasonry can be seen as a group of responsible like-minded men who want to progress as individuals and at the same share a journey to self-enlightenment. And the practice of freemasonry doesn’t just involve attending Masonic lodge meetings; it’s a full time commitment with members usually finding ways in which they can contribute something to the community.

Many misconceptions surrounding freemasonry no doubt stem, in part at least, from the bounds of privacy within which freemasonry has always conducted itself. The practices of freemasonry are not advertised. Freemasonry is not a secret society as a lot of people seem to think it is. However, freemasons do believe that the internal affairs of their organization are a matter for members only and conduct their activities accordingly. There is no secrecy about freemasonry’s aims and objectives however, and all members are free to acknowledge their membership and many do so in the appropriate circumstances.

Freemasons follow three great principles: brotherly love – showing tolerance and respect for others’ opinions and behaving in a kind and understanding manner towards one’s fellow creatures; relief—practicing charity and caring for one’s family and the community as a whole; and truth—seeking to attain high moral standards in one’s own life in the search for truth.

Nearly all men who become freemasons do so because they want to emulate a man they greatly respect and admire, and any organization built on a foundation as strong as a man’s desire to improve himself can certainly outlast rumor and gossip.