Home Masonry When is a Man a True Mason? – The Ideology of Freemasonry
Spread the love 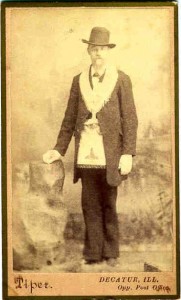 Even in the 21st century when science has long since replaced mysticism as the one true source for answers to questions like, “Why are we alive?”, Freemasonry retains its hold on men’s imaginations. Bestsellers like Dan Brown’s The Da Vinci Code and its follow up The Solomon Key are chock full of arcane Masonic references, while blockbuster movies like Nicolas Cage’s National Treasure popularize the relationship between our founding fathers and the mysterious fraternal order.

From its beginnings some time between the late 14th century and the mid 15th century in the west of England, Freemasonry has been viewed by outsiders with fascination and mistrust in equal parts. But how do members of the Masonic brotherhood itself view it? In his own eyes, what makes a man a true Mason?

Benjamin Franklin — himself a Mason — once observed, the grand secret of the Masons “is that they have no secret at all.” While outsiders frequently label Freemasonry a secret society, Freemasons themselves are more apt to describe their brotherhood using the words “esoteric” or “occult” meaning “hidden.” The rituals of the organization and the means by which members recognize one another are proprietary information not to be shared with non-initiates, but are not tied to any one single dogmatic interpretation. The square and the compass are symbols found in every Masonic Lodge, but their exact meaning may vary from one lodge to the next.

And although the true Mason is one who recognizes and correctly uses the esoteric tokens, words and signs that constitute what members of the brotherhood call the perfect points of entrance, the true test of the Freemason is service – both to others and himself.

From its inception, the primary purpose of the Masonic organization was to build a social network that transcended politics and international boundaries. Doing good works within the community (however that community is defined) is just as central to the tenets of Freemasonry as it is to fraternal organizations like the Lions and Rotary Clubs. Moral rectitude is a third critically important Masonic principal: Freemasonry communicates the important moral lessons it teaches members through allegories and parables as they progress from lower to higher degrees of understanding.

One of the conditions for acceptance into the Masonic brotherhood is belief in a Supreme Being, but members are quick to point out that the Freemasons are not a religious organization: individuals Masons are allowed to define the concept “Supreme Being” in any terms they choose. In keeping with the symbolism of the brotherhood’s name, the Supreme Being is referred to as the Great Architect of the Universe. To some degree, the tenets of Freemasonry are at odds with the beliefs of orthodox Christianity because Freemasons believe that spiritual advancement comes not by redemption through the blood of Jesus Christ but as the result of good works and personal improvement.

Perhaps the best summation of what it means to be true Mason from the perspective of the organization itself is that Freemasons first and foremost are men of honor, committed to making the world a better place. In the 21st century, honor is almost an antiquated concept. The word conveys a sense of respect for the integrity of others, but it also conveys a sense of respect for the integrity of one’s own self that is every bit as strong. From that it follows then that allowing oneself to be helped in times of need is just as important as helping others because self development can only be achieved with assistance. When is a Man a True Mason? When brotherhood is not just an abstract concept, but also the defining concept of his life.